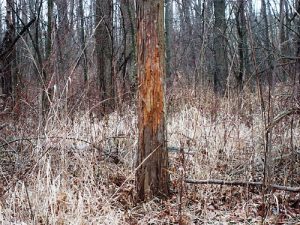 Is that a familiar term to you? It is a new one to me. The concept is familiar but the action is an afterthought, or at least is used to be. It is a universally true idea and it’s the greatest weapon we have in the battle against loneliness and despair. To see the excluded and find a way to include them, to involve them, to care.

It’s so easy to get lost in our own activity and overlook those who would love to get lost with us. We aren’t being mean or cold. We aren’t bad people. But that’s exactly the point. To be inclusive is to be special, to be thoughtful, to be heroic. Inclusion doesn’t occur accidentally. Inclusion is a beautiful action of love.

Deer are clandestine creatures. They lay low during the day and travel silently at night. Always the hunted, they live their lives in hiding.

Deer hunters are strategic. The scout during the day, examining trees for antler marks, investigating the ground for hoof prints, and searching the forest floor for poo; all in hopes of discovering the ideal location for their stand. Always hunting, they survey the forest, ever watchful for their prey.

To include is to hunt. Our prey are those forgotten, neglected, ignored, or overlooked. They are the ones sitting on the sidelines, in the back of the room, following a few steps behind. They don’t want to hide, yet they are camouflaged. Lost among the faces. Hidden in the crowd. But the hunter, the includer, will find them. They will search the perimeter until they find what they seek.

As I sit on my back porch writing this post, Andrew and Jackson are being hunters. Caedmon scoots on his knees so we have foam floor mats covering half of the concrete porch. He was on the foam while Andrew and Jack were playing on the other side. They were lost in their game and Caedmon was calling out to them because he wanted to be found, to be included. The guys are young and still learning, so I asked Jack how he would feel if he were over there, being left out. He nodded his head, pursed his lips, and clicked his tongue. I asked him to speak English and he said, “not good.” I reminded him of Jesus words to love our neighbor as ourselves and went back to my writing.

A minute later they boys had moved their game to where Caedmon was waiting and a minute later the magic happened. I began to scold Andrew for picking up the 3 x 4 patch of carpet that we use as a door mat, but he was saying something about a bridge and there was no deception in his face so I withheld my correction. He placed the carpet on the concrete in front of Caedmon then went to get a second so that he could complete the bridge. Two pieces of carpet to make one bridge of inclusion. Two brothers, two heroes, one inspired father.

Two more brothers are being heroes and examples to many. They live in Atlanta and just like Jackson, Andrew, and Toby, they have a brother with Cerebral Palsy. Brent Pease trained and completed a triathlon. When he was finished, Kyle asked if he could race in one too. Most would say no, because Kyle is in a wheelchair due to his Cerebral Palsy. But Brent and Evan are hunters and they said, “yes.” The three of them will be running in the Tampa Triathlon. Their bridge? An oversized jogging stroller. Whatever works.

You can read Pease brothers story here.   You can follow them on facebook here.  You can read their blog here.