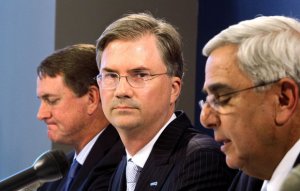 Is it just me, or are a lot of universities getting in trouble recently? One of the bell cows of the Big Twen, Ohio State, is in serious trouble for cheating and covering it up. Pac 12 power, Oregon, is under the microscope of the NCAA. Their conference neighbors, USC, are experiencing the aftershocks after the Reggie Bush earthquake rocked them. Reigning national champion Auburn is being staked out and rumors are swirling that the FBI might be getting involved and the Tigers might be in the worst trouble of all. Then, this week, the University of North Carolina fired their football coach, Butch Davis, and saw their athletic director step down as a rancid cloud smothers Chapel Hill.

It seems to be everywhere, but I’d bet a lock of Justin Bieber’s hair that, assuming your university isn’t already under investigation, you think your school is above reproach.

Being a college football fan is like playing golf with the guy that thinks he’s Butch Harmon, even though he’s offered more slices than Pizza Hut and has a swing that would make Charles Barkley cringe. He’s somehow convinced he’s a giime away from qualifying for the US Open, and feels burdened to share his exhaustive golf knowledge with everyone… during their backswing.

I wonder how many Buckeye fans were bashing Michigan Men for the Rich Rodriguez rumors, before The Vest got nailed. You know Oregon fans looked down their bills at the cheaters down in Los Angeles, until the NCAA/CSI showed up in Eugene.

Some call it wearing (insert your team’s colors here) colored glasses, others prefer saying we’re drinking the Kool-aid, but no matter what you call it, we’re wearing blinders. Everybody else is doing it.

If it were only true of dilusional collge sports junkies, it would simply be kindling for rivalry fires. But there’s another, even more sensitive area where we use selective eyesight – our kids.

No one serves more “Kool-aid” than kids, and no one drinks more than their parents.

Is it pride? Do we think our parenting skills are so high that our kids simply couldn’t do those things?

Is it affection? Are we so in love with our kids, or idea of who they are, that we refuse to believe they could do those things?

Is it denial? Do we have a suspiscion, but reject it and hope we’ll learn the smoke was coming from someone elses home?

It’s probably a little bit of everything. We love our kids, we’re confident in our parenting, and we want to assume the best – it’s natural.

This is why we need trusted friends in our lives, who we permit to speak the truth about our children. We have to be specific, and ask our confidant to tell us when they see our kid walking down the wrong path. It’s remarkable how much we can learn; just think of how much you know about everyone else’s kids.

Raising children today, is like backing a 20 foot trailer through a defensive driving course designed by that Geico therapist. Doing it on your own is next to impossible. Having the help of a passenger makes it a little easier. But having a friend or two outside, behind the trailer with their eyes on trailer and on the cones, improves your chances for success exponentially. “You better not hit one of my cones, ya Jackwagon!”

Our kids are going to make mistakes, and they need us to help them navigate through the chaos. We can’t pretend everything’s OK and leave them to fend for themselves. They need engaged, aware, parents who are willing to do whatever it takes to help them be their absolute best. Even if that means we have to listen when a freind tells us our kid is in trouble.