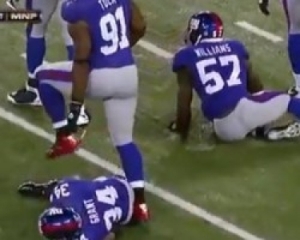 I was listening to the Dan Patrick Show on my way into work this morning, and they were talking about the New York Giants “tactic” of feigning injuries in an effort to slow down the St. Louis Rams offense. It was interesting to hear DP describe the NFL as a league of “deception.” I think he would expand that to encompass football in general,as he cited examples like quarterbacks trying to draw the defense offsides with fake snap counts as his evidence.

I believe there’s a fundamental difference in something like a fake snap count and faking an injury – lack of integrity.

If a defensive player jumps offsides due to a quarterback’s cadence, that’s on him because the play starts on the ball movement, not a sound. But faking an injury is lying. Shoot, it’s a full-blown conspiracy, involving coaches, trainers, and players. Calling it gamesmanship is poor form.

If you have 90 seconds, look at Deon Grant “allegedly” faking an injury and come right back.

If I’m the NFL, I’m punishing the entire Giants organization. It’s a discredit to the league when your franchises show such contempt for integrity in the name of winning. But they can’t because there is no integrity in the league to begin with. Just look at the contract process as an example. A team signs a player to a 5 year deal, but cuts them after two. A player signs a five-year deal, worth $1 million a year, but sits out and demands more money after year three. I want to be mad at the player, but I’d probably do the same thing, because the NFL simply lacks integrity.

When did our word stop meaning something? I’ll tell you when. When young kids are taught “gamesmanship” in recreational sports. Grown men teaching youngsters to bend the rules, and push the envelope in order to win a championship. In a reverse sense, it happens when coaches allow kids to cut corners, whether it’s running laps or class effort. We are permitting and instructing our kids to be liars and cheats, so we shouldn’t be surprised when it happens in the NFL.

First of all, parents can’t expect sports to teach their kids values, sports are morally neutral. The coaches determine what values are modeled.

Secondly, parents cannot assume a coach is teaching their kids the right things. If you are going to give a person that much access to the moral development of your child, you have to engage in the process. You be the coach, or become an assistant coach, and lead with integrity.

Finally, if you are coaching young kids. DO THE RIGHT THING! We aren’t out there to win games, we are out there to help the kids we’re coaching develop, and that includes their character. We have an opportunity to teach them respect for their fellow-man, personal integrity, the value of hard work, etc. I sure hope we aren’t teaching them to compromise, bend the rules, and prioritize winning over integrity.

Check out these two links, one video and one article, and share you’re thoughts.

Should this kid have done what he did, and is it right for the coach to be fired?

This video is inspired on a true story. Did the kid do the right thing? Would you feel the same way if it was a player on your NBA or NCAA team in a post season game?