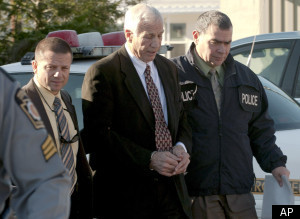 What you are about to read will make you uncomfortable. It centers around the tragic events that allegedly occurred in State College, PA for more than a decade. I feel safe in assuming you know of what I speak. The most troubling aspect is the alleged pedophile started a non-profit to help disadvantaged youth, and used it as the ultimate “nice guy” cover up to meet more children and rape them. If it’s true, it’s sickening.

The reality of the accusations are uncomfortable enough, but I’m going to try to make you think, and it will become more uncomfortable still. My desire is for my words to have a surgeon’s precision, but no matter how gentle or precise, a cut is a cut. So please, anticipate being made uncomfortable, but my hope is that you’ll read this and think, hard.

Most of my information on the alleged incidents is coming from sports commentators, who are quick to admit they aren’t experts, but without exception declare the alleged incidents to be disgusting, terrifying, evil, etc. One of Sandusky’s former players, and current ESPN analyst asked this haunting question, “man’s inhumanity towards man is mind-boggling. Where do we stop with this stuff?”

I’m guessing you’re tracking along just fine so far. You might be nodding your head in agreement, echoing Millen’s question in your mind, and getting more and more frustrated by “man’s inhumanity towards man.”

Brace yourself, because here comes the tough stuff.

What’s so bad about what Sandusky is accused of doing?

Does our culture have any moral grounds whatsoever to declare Sandusky a bad guy or his actions reprehensible? Take a minute and be careful here.

Before we lynch Sandusky, let’s consider some realities about North America in 2011.

So I ask again, what’s wrong with what Sandusky did? If it’s totally acceptable to kill a baby, how dare we say it’s wrong to rape a child.

Don’t we live in a culture that absolutely demands tolerance? Isn’t truth dependent on the individual? Can’t we do whatever we want because it’s who we are?

After all, what about Sandusky? What about his needs? Wasn’t he just born this way?

Lady Gaga thinks so, and she articulates what millions embrace,

I’m beautiful in my way
‘Cause God makes no mistakes
I’m on the right track, baby
I was born this way…

No matter gay, straight, or bi,
Lesbian, transgendered life,
I’m on the right track baby,
I was born to survive.

Since “a different lover is not a sin,” “no matter gay, straight, or bi,” isn’t is only fair to include the pedophile? Doesn’t Jerry Sandusky have the right to act upon his impulses, regardless of what you or I think is immoral?

The Journal of American Medical Association agrees with GaGa,

During psychosexual development, no one decides whether to be attracted to women, men, girls or boys. Rather, individuals discover the types of persons they are sexually attracted to, i.e., their sexual orientation. [source]

I want you to notice two important elements of the Journal’s statement:

WebMD says this about “sexual orientation”

The key here is identity, and that’s exactly what GaGa’s getting at when she says, “I’m beautiful in my way ‘Cause God makes no mistakes.”

Ellen Degeneres says, “I never thought it was anybody’s business who I am and who I am with…” [source]

Who are we to judge? What give us the right to cast stones?

You might be thinking, “Ryan, you go too far. There’s a big difference here. Two grown men sodomizing each other are consenting adults and can do what they want. What Sandusky is accused of involves the abuse of a defenseless minor.”

OK, I’ll grant you that. But let me ask a return question, is their any more defenseless a minor than a baby in the womb? More defenseless still, what about a baby with Down’s Syndrome? Did you know they are legally murdered at a clip nearing 90%? [source] Where’s the outrage?

While Professor  Singer believes parents should be free to kill their baby at any time in the first 28 days, society is also struggling to define a “minor.” So, what is a minor? Depending on your country and what you want to prohibit, a minor could be anywhere between 15 and 20. In undeveloped countries that number can fluctuate even more.

Can you see how slippery this is?

In case you are concerned that I’m overstating my position, let me allow the advocates for homosexual behavior, and the elimination of age-of-consent laws to speak for themselves.

Were you aware that the “Gay Rights Platform” of 1972 included the following?

7. Repeal of all laws governing the age of sexual consent. [source]

Were you aware of the organization NAMBLA (North American Man Boy Love Association)? Perhaps unnecessary to share, but one of their tenants is,

We know that differences in age do not preclude mutual, loving interaction between persons. NAMBLA is strongly opposed to age-of-consent laws and all other restrictions which deny men and boys the full enjoyment of their bodies and control over their own lives. [source]

Did you know that when sitting Supreme Court Justice, Ruth Bader-Ginsberg, was an ACLU attorney, she tried to get the consent age lowered from 16 to 12? she wrote,

Eliminate the phrase “carnal knowledge of any female, not his wife, who has not attained the age of 16 years” and substitute a federal, sex-neutral definition of the offense. … A person is guilty of an offense if he engages in a sexual act with another person. … [and] the other person is, in fact, less than 12 years old. [source]

This is the slide I’m trying to point out. We are all outraged by Sandusky’s alleged offenses. But, according to the Grand Jury Report (not for the faint of heart), at least four of Sandusky’s eight alleged victims would have been legal partners if Bader-Ginsberg had her way, because they were 12 or older.

Not only are we going to have to permit pedophiles their rights to molest children, because it’s their “identity;” we’re going to take the stigma away by dismissing age of consent laws. Let Millen’s words echo, “man’s inhumanity towards man is mind-boggling. Where do we stop with this stuff?”

This post is intended to shock but, as you can see, it isn’t that far from reality.

This issue highlights the moral relativism of today. We are united in our outrage at the alleged molestation and cover-up. But we have to ask ourselves, “what moral grounds do I have to condemn Sandusky’s actions?”

The question our society must ask is how we can condemn Sandusky and have legal abortion at the same time? How can we celebrate homosexuality and condemn pedophilia? We cannot have it both ways.

It’s wildly unpopular in 2011 America, but the Biblical worldview is the only way we can condemn the alleged acts. Without a moral anchor, we will continue to slide towards even greater inhumanity.

I believe absolute truth exists. I believe there is such a thing as right and wrong, good and evil. I believe God planted an awareness within our souls of good and evil, and I believe He spelled it out in the Bible.

What Sandusky is accused of doing is an abomination. It’s an act of treason against humanity. It’s evil. However, it’s not evil because I don’t like it, or because it’s not cool to hurt children. It’s evil because God said so.

For further reading on the legalization of pedophilia and it’s direct link to homosexual activity, read this article.
Just another disturbing note I found on NAMBLA. This is from a Mayo Clinics proceedings report titled, A Profile of Pedophilia: Definition, Characteristics of Offenders, Recidivism, Treatment Outcomes, and Forensic Issues

Pedophilic abuse is often not reported for a variety of reasons ranging from fear (eg, worried about not being believed, will be physically harmed if child reports abuse), emotional reasons (needy child identifies with the pedophile), or guilt (feels responsible for what happened). In the study by Bagley et al, the most common response why individuals who were molested once did not report abuse was that they could “handle the abuse” and it “didn’t bother” them (50.7%), with the second most common response being that they were afraid of how other people would react (40%). For children who were abused multiple times, the most common response was that they felt partly responsible (57.7%) or that they did not want the person prosecuted because of some degree of attachment (44.2%). It is startling that the North American Man/Boy Love Association Web site uses research with similar findings (eg, it did not bother me or I liked the experience) to justify its position on why it should be legal for adult men to have consensual sexual relationships with boys. (formatting mine)