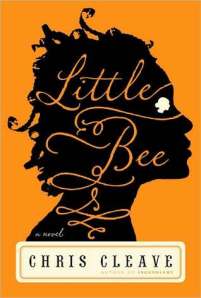 I overheard a girl raving about the book Incendiary, written by British author Chris Cleave, after I finished my book signing in Jacksonville. I asked her why she found the author so compelling and she gushed about his masterful use of perspective. Recently, I have been trying to read a broader spectrum of authors in order to develop more skill as an author myself so I decided to pick up one of his books. The girl recommended Little Bee, claiming that it was his best, and since she even went and found the book for me, I agreed to pick it up. She was even kind enough to point out the creative art work on the cover. You’ll notice the white area where the eye should be is actually a profile of a woman. That profile, within the larger black profile, represents the dual protagonist perspective she previously alluded to. Pretty cool if you ask me.

I enthusiastically dove into the book and was quickly caught up in the story. Cleave did a masterful job depicting two very different perspectives, both of whom were women! One of the women was the successful publisher and editor of a British magazine and the other was a Nigerian refugee that had escaped to England in hopes of starting a new life. They offered drastically different perspectives on the world and the specific events they shared. I enjoyed watching Cleave shift his language and style to fit their unique personalities.

The book also brought to light some of the issues involving refugees coming into Europe, the violence and corruption surrounding the oil industry in Nigeria, and the human tendency to pass judgement on other people. I appreciate him offering a voice to these issues and I think it can generate some thought-provoking conversations, but I have an issue with the book and I’s love to read your thoughts.

Language. Specifically, foul or unwholesome language. I realize that words, to borrow a concept from Little Bee, have the ability to trick us and change their meanings. I can appreciate that there are words that have both a neutral context and an ugly one. I also realize that what may be offensive to one, could be totally harmless to another. I get it. But at the same time, I think we can agree that there are words out there that are primarily, if not exclusively, ugly. In Little Bee, Cleave used the word that got Ralphie Parker and Schwartz into so much trouble, quite a few times. There was one incident when it came from the mouth of an irritated father yelling at his toddler son for making a mess.

I found it distracting and unnecessary to the story. Frankly, I think using that kind of language takes something away from both the story and the author when I come across it. I bunch it into the same category as Donkey cussing in Shrek. It just didn’t make the story better and effectively set the book out-of-bounds for some readers. (Bear in mind, there are other elements of the book that set it out-of-bounds for some readers, but that is beside the point.)

I believe the same emotion and intensity can be reached without depending on such language and I wish writers, especially those as skilled as Cleave, would avoid it. It really was a magnificent story that was well written and brought important issues to light. However, like a stain on a prom dress, the presence of the language unnecessarily drew my focus away from the otherwise beautiful work.

I’d love to hear your thoughts. Do you find my opinion totally prudish? Am I spot on? Do you think that the language is helpful for creating the proper moods? Comment away 🙂