Of the options available to me, I’ll go with “medieval mercenary warrior;” it’s certainly cooler than “wannabe writer begging for employment.” As a former college football player, I find it funny that the freelancers went from dragon-slayers-for-hire to the guys writing about the dragon slayers, and here I am potentially writing about football players.

I’m striving to write as my full-time vocation and I feel like the Hollywood waiter looking for his big break. Where’s the employer looking to pay me a salary to stay at home and just be creative? Why hasn’t anyone called and hired me write about whatever I want, on my own schedule?

I’m picturing a comfortable office overlooking a serene pond, the ideal dog resting at my feet, and the creative freedom to create multiple works of literary genius. Am I asking too much? 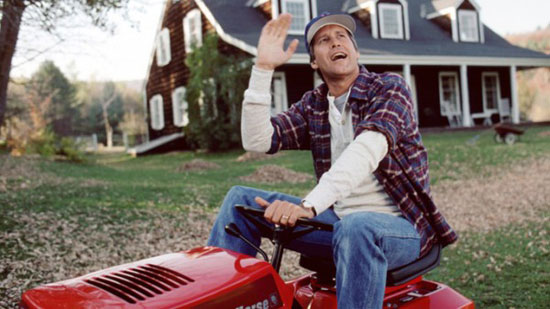 Chevy Chase, as Andy Farmer, in Funny Farm. He played a writer in the Fletch series too.

Well, in the meantime, I’m starting small and focusing on diligence, trusting that the farm will come. I opened an account on elance.com, created my profile, and submitted proposals for six or seven jobs. Maybe I’ll be writing movie reviews, editorials for a new men’s magazine, sports columns, articles for a Christian teen magazine, or helping a preacher convert his sermons into a book… or maybe none of the above.

I reached out to two of the magazines who published me before to gauge their interest in me writing for them again. I’m still producing copy on my next book, but the most exciting mercenary news came from a magazine called The Old Schoolhouse. About a month ago, I submitted three proposals for articles, and last night they emailed to accept two of them. My articles will run in their August and September issues, starting with a rewrite of Nobody’s Normal. They’re only paying me $40 per article; however, I’m writing, I’m writing about topics that are important to me, and I’m getting paid to do it. I can see the Mallards floating on the pond now…

(If you’re interested in getting signed up with elance.com, I’d appreciate you using the link in this article; it helps me out somehow.)