Have you ever tried to fit in? I have, and it didn’t go well. The setting was Blue Ridge Elementary School in Augusta, GA. It was about 1988 and I was a fifth grader desperate to be cool. The cool kids wore Coca-Cola clothes, Umbro shorts, and Reebok Pumps (not necessarily at the same time, but how cool would that have been?). My parents didn’t fall for the hype machine, so I went without the totally awesome threads, but I still found a way to fit in.

I guess everyone wanted to be like Uncle Jesse (this one, not this one) because hair gel was all the rage. But I didn’t know hair gel existed; I just thought everyone had wet hair. The first thing I did when I got to school each morning was lean into a bathroom sink and drench my head – sopping, soaking wet. As my hair dried, my bladder grew sensitive and a trip to the bathroom / hair salon occurred. Why didn’t anyone stop me? Where were the loving, caring adults in my life? How could they just stand aside and let me wash any chance of becoming cool down the drain? The fact that I was trying so hard to be cool just proved I was far from it. This is exactly what Jacob was talking about in yesterday’s “Speaking of Normal.”

Normal is as arbitrary, unfair, and cruel as Cool. Who decides? What qualifies? ’80s cool is ’90s lame, and ’90s cool is today’s “really?” Not being Cool is temporarily miserable, but not being Normal can be incurably catastrophic.

No one has to try to be Normal, because nobody’s Normal. Like shards of a stained glass window, we’re all unique, purposeful, precisely where we should be, and part of a bigger, more beautiful picture. Red need not strive to be green, and small need not envy the large. It’s only when red begins to believe his hue is Normal that problems arise.

Robert Rummel-Hudson wrote in his book, “Before we ever moved there, I bought Schuyler the obligatory T-shirt (Keep Austin Weird). A college town and hippie haven, Austin was the perfect place to bring Schuyler. It was a place where everyone was weird, which meant no one was.” It’s just a way of saying nobody’s Normal in Austin, TX. Wouldn’t it be great if that were true everywhere? 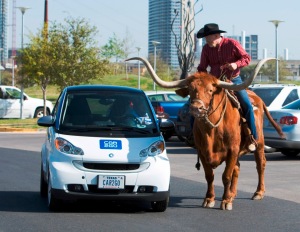