I don’t know why Caedmon has Cerebral Palsy. I know it’s not to make me a better person, but it has. I know it’s not so he can inspire other people, but he does. I know it’s not so his siblings develop compassion and long-suffering, but they are. Over the course of his life I’ve wrestled with the “why” question at length and at times found myself confident in an answer. And while I still lean toward an answer, I find myself agreeing with G.K. Chesterton, who said, “the riddles of God are more satisfying than the solutions of man.”

Living in an extraordinary family is sometimes an arduous experience and other times a Hallmark card. I can be told I’m an inspiring father just one day after selfishly getting upset about soggy cereal. Such is life in our home.

The night I was an “inspiring father” Jeni and I took Caedmon to see Kristian Stanfill play in a worship-concert. (If you’ve not been to something like this, imagine any other concert you’ve attended but instead of the attention and adoration being focused on the singer or the song, both the singer and the songs focus your attention and adoration on God.) Our family was at the end of a day saturated with God’s kindness and being at this event was proverbial icing for Jeni and I, but for Caedmon it was the cake.

Caedmon loves to sing, especially in church and the booming and brilliance of fireworks excite him like a Star Wars geek watching a trailer for Episode Seven. This concert’s light show was akin to July Fourth fireworks and the songs were songs of the church, so Caedmon absolutely loved it. This wasn’t the “I love strawberries” kind of love. No. This was more like a kid raised on the radio broadcasts of his favorite baseball team getting to attend his first game in the stadium. Caedmon jumped each time the base reverberated through his chest, and smiled hard enough to cause my cheeks to cramp. And boy did he sing!

None of us really sing the same I guess, but Caedmon’s voice is particularly distinct because Cerebral Palsy makes it very difficult for him to form sounds. In spite of his best efforts, he rarely articulates the words, but his uninhibited  sincere, infectious singing is exotic and wonderful. When they played a song he didn’t know, I would shout him the words before each stanza so he could belt it out with the thousand or so college students packing the venue. As the singing began, Caedmon was in his wheelchair sitting in the aisle, but before two songs were finished he wanted to get up.

With somebody’s assistance, Caedmon can stand and since everyone else in the room was on their feet that’s where he wanted to be. I stood him in front of me and let his body lean forward against a pew, his arms hooked over the seat back. I slid forward so my knees were on either side of his hips and placed my hands under his arm pits to allow him as much stability as possible.  Church people often raise their hands when they sing and Caedmon is all about it. He elevates his arms as high as his body will let him and for as long as his underdeveloped shoulder muscles will hold them up. We did this for a song or two before he told us his feet were hurting from his AFO’s (therapeutic braces). 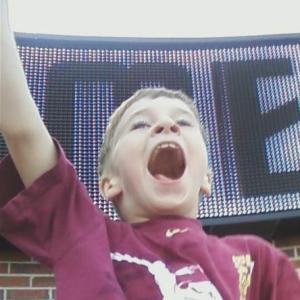 This wasn’t at the concert, but it does give you a taste of Caedmon’s enthusiasm.

We got the AFO’s off his feet and then the real fun began. I stood with Caedmon, his back against my chest, and we savored the moment together. Jeni held his hand whenever he kept it still enough for her to grab. He sang loud, danced hard, and smiled big for songs both familiar and unfamiliar. And I saw the guitar player directly in front of us notice Caedmon, and smile.

They played a song called “Here’s my Heart” which I’d never heard before. It was a little slower so I’d taken the chance to take a breather and sat down for it. Caedmon was sitting high, straddling both my knees, and leaning forward to hold the pew. I was reading him the words so he could sing along but when the chorus played I held my tongue.

I am found, I am Yours
I am loved, I’m made pure
I have life, I can breathe
I am healed…

Healed? My mind began to race. Is Caedmon healed? I ran my left hand up his thin arm and held his shoulder, feeling the ball at the top of his humorous sticking out of his shoulder socket. His muscles aren’t strong enough to keep his arm from dislocating, much less ‘healed.’ I was struck with doubt and reverence at once and struggled to discern if there was meaning in the moment. Not knowing what else to do, I prayed.

I am found, I am Yours
I am loved, I’m made pure
I have life, I can breathe
I am healed…

Maybe ‘healed’ in this song isn’t about physical healing but speaks more to spiritual healing. I’m pretty sure it does, but I know Jesus healed people when he was Emmanuel and I’m confident he can and does heal people still. After I finished praying, I listened to the students sing and examined my son’s body. It was physically unchanged, but that boy still sang. I accepted the moment for what it was, stood with Caedmon, and we sang together until the band stopped playing. He even spent a song or two on my shoulders so I could hop and spin just a little, which made Jeni nervous and thrilled Caedmon.

Afterwards, with Caedmon back in his wheelchair, we were standing in the aisle when a stranger tapped me on the shoulder. I turned and saw a young man wearing a FSU shirt and a marvelous smile. His soft-spoken yet confident voice shared how touched he was watching Caedmon worship. He looked my son in the eyes, shook his hand, and told him he was great. He asked if he could pray with us so we prayed and he lifted Caedmon, who he called “my little buddy,” to God in thanksgiving. He deftly prayed for Caedmon and I could tell his heart was where mine was earlier, but he never spoke of brokenness or frailty.

This student left and another guy came almost leaping over the pews to where we stood. He initially ignored Jeni and I and went straight to Caedmon. He told him he saw him worshiping and loved seeing him sing. Then he asked Caedmon if he liked music. Caedmon said, “yeah.” Then he asked if he had a favorite instrument. Caedmon almost stood in his seat and waved his right arm up and down with a grin. Jeni translated, “he loves the drums.” The guy ran to the stage, jumped up, grabbed the drumsticks, and brought them back to Caedmon.

It turned out he was one of the guitar players. Caedmon admired the drumsticks while the stick thief spoke with me. Barely having time to enjoy his gift, the previous owner of the sticks ran up to Caedmon and knelt before him. This was the guitar player that I noticed observing Caedmon while he played. It was so interesting to see these young guys obviously aware of Caedmon’s uncommon form but ignoring it to see him simply as a new friend and someone they wanted to be close to. This second guitar man echoed the sentiments of the our first two visitors and then the two musicians prayed for Caedmon, for Jeni and I, and for our family. They lingered a while longer, and as I leaned against a pew and watched Caedmon communicating with these guys, a fourth man approached me.

“Can I just tell you I wept watching you and your son.” He was dressed in black and wearing a radio because he was the man in charge of all the staging and rigging. “It was so beautiful to see your family and I just cried for most of the show.” We talked for a few minutes and I knew these weren’t tears of pity but tears of joy from seeing a young boy dance and sing with the unhindered joy that so many of us are afraid to express. What just happened?

In typical Sprague fashion, we were some of the last to leave. We left the building and saw the second guitar man, a man I later learned was Bret Younker (This is Brett at another worship-concert in the Georgia Dome), talking with a group of fans. As we passed, he turned away from them, waved and said goodbye to Caedmon.

So what am I to make of that night? What are you to take from it? I was praised for being a good dad, but I’m no better than any other father who was there that night. I was just noticed because of my son. There were over a thousand people there singing and dancing, yet Caedmon stood out because his singing and dancing occurred in wheel chair or in my arms and in spite of physical difficulty. His extraordinary body gave him a platform and people were moved by his life’s song. And I couldn’t be more proud, but what of the whole healing thing?

I’m reminded of another person who has Cerebral Palsy, a traveling evangelist named David Ring. He recognizes that he speaks slower and less articulate than most, but when asked if he wished he were different he responds by saying, “I wouldn’t change anything because of my Cerebral Palsy people listen to me when I speak.” And isn’t that what happened with Caedmon?  The boy’s life is always up hill and a father sees it. I believe Caedmon sees it too, but his perspective is more similar to the climber standing at base camp looking to the top of Everest as opposed to the thirsty man in a desert. And because of his Cerebral Palsy people listen to Caedmon, and they’re moved.

I was praying for the mountain to move while Caedmon simply climbed. I prayed for his body to be free while he danced in spite of it. I prayed for his tongue to be loosed while he sang at full volume. My heart went out while his was going up and I’m still trying to figure out what to think.

I know Caedmon had a wonderful evening. I know those who saw him were encouraged. I know Jeni and I were encouraged by the way these people reached out to our family. I know Caedmon was thrilled with the drumsticks, and just like when The Little Drummer Boy played his best, I know Jesus looked at this moment and smiled.

This is David Crowder performing Here’s My Heart from Passion 2013 in case you’re interested.