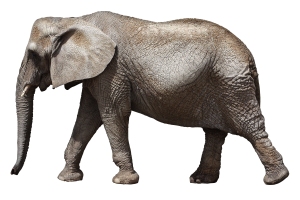 It’s not that we aren’t talking about the elephant in the room, it’s that we’ve grown so comfortable with it we’re content wading through the crap he leaves all over the floor.

In all the speculation about possible charges or suspensions, the wild guessing about the accusing woman’s identity, and the steady stream of overreactions we’re just decorating the room with pachyderm poop. No matter how we spin it, it will still stink.

Jameis Winston shouldn’t have had sex with that woman. That’s the story. Assault or not, he shouldn’t have touched her. I have a real hard time listening to people say there was really only something wrong if she said ‘No’ at some point in the evening. If she had said ‘Yes’ the whole time this would still be wrong. We wouldn’t be talking about criminal charges and tarnished careers, but the reality of wrong would still be present.

Here we are talking about  legal ramifications instead of the obvious reality of sexual sin. We’re standing over a dead body at the foot of a cliff, debating the manner in which he fell while the cliff’s edge is crowded with scantily clad fools doing the Wobble. We should be screaming, “GET BACK!” We should be pointing to the poor soul while we say, “Don’t let this happen to you.” Instead, we treat people like they’re mindless and just give them knee pads and helmets for their inevitable fall. It’s foolishness.

If you engage in sexual activity outside of your marriage you’re walking across a floor covered with shattered glass. You may survive, but nobody’s coming through without scars.

Sex is an awesome relational force that is to be respected. Handled appropriately it can repair relationships, unite two as one, and even create life. Handled carelessly it can destroy relationships and individuals, divide people at the deepest level, and crush lives. It’s designed for a specific person – a spouse of the opposite sex, and a specific time – marriage.

I am a BIG Jameis Winston fan. I bought into the hype when I first heard it, I love watching him play, and enjoy watching him work with his teammates. I sincerely want what’s best for this young man and will mourn if he goes out like this. As a ‘Nole I am really hoping he leads this team to a national championship!  I say that to help you understand I’m not judging him.

I am, however, judging his behavior. And we all need to do a whole lot more of it.

Is it judgmental to say rape is wrong is it? Is it judgmental to say a bully’s actions are wrong? Of course not, because we understand we have a responsibility to identify wrong actions and appropriately address them. But in this era of domesticating moral elephants we’ve demanded everyone to leave everyone else alone. And as a result we have rampant divorce, teen pregnancy, rape, epidemic levels of STD’s, fatherlessness, and women enduring the daunting work of single parenting.

Obviously, I believe there are moral absolutes in play here, but just for the sake of argument let me share something I say to the college kids I get to work with.

“What’s easier: expecting a child within the security of a loving marriage at a reasonably expected time, or being pregnant as a college sophomore deliberating between three pretty terrible options – single parting, placing your child with an adoptive family, or having an abortion?”  (Regardless of your political view of abortion, we can agree that nobody wants an abortion. Some view it as a necessary means to an end, but it;s certainly not desirable and absolutely not easy.)

Every single one of them sees the same thing you do. The first option is clearly better. Plenty still believe they can cross that Vaseline high wire without falling, but deep down they know there’s a good chance they’ll get hurt.

I wonder if we were to ask Jameis, “Would you rather lead your team to a perfect record and a national championship, win the Heisman, and go down as one of the greatest ever; or get mired in a sexual assault case and have your behavior plastered all over the Earth?” What do you think he would choose? What would you choose?

It’s time we stop denying the steaming piles of elephant digestion all over the place and kick the animal out of the house, out of the yard, out of the city.

We need to stop justifying immorality in the name of freedom and niceties and start dealing in love and truth. We need to challenge our boys to become men who yield to authority and honor women. We need to encourage our girls to be inwardly beautiful, outwardly strong and confident they are worthy of a man who would die for the opportunity to love them. No woman should ever compromise, ever!

The longer we perpetuate promiscuity by permitting perversion the longer we’ll have immature men who don’t know how to treat a woman and broken woman who don’t believe they are worthy of honor.

Jameis became famous from turning bad plays into remarkable successes. Let’s hope he can do the same with this one and then we can all celebrate something truly remarkable.