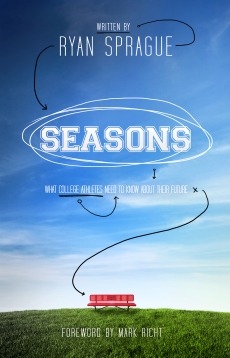 Student athletes are facing challenges and dealing with pressures no generation before them experienced. Many enter their university having had very little input from the generation ahead of them and they don’t quite know what to expect.

This is a book written by a former student athlete specifically for today’s student athlete and it addresses many of the issues these young men and women will deal with on a regular basis.

But it’s not your typical non-fiction book. I believe there is great power in a story so that’s what I wrote. Seasons much more closely resembles a novel than it does typical non-fiction. Instead of headings and bullet points, you’ll read about a grandfather who arranged a series of encounters where his grandson gets to learn from people who have been where he wants to go. It really is a unique and necessary book, but don’t just take my word for it…

Today’s student athlete wants to have a voice, to be a part of the conversation. Seasons gives them that opportunity. At the same time, it provides enough structure to lead them where they need to go and get them talking about all the elephants crowding the room. In that sense, it’s a lot like coaching because a good coach has to get players to do the things they may not want to do in order to lead them to where they want to go. This book is a good coach.

Seasons is also available on Amazon and you can read what people are saying about Seasons.